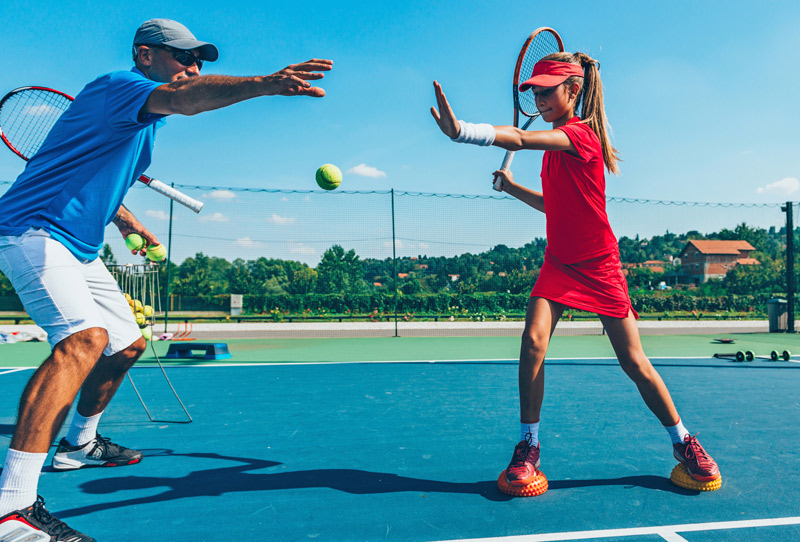 Searching for some beginner tennis drills to help a newcomer learn the sport? You’ve come to the right place! Anyone who has tried teaching a beginner to play tennis knows it can be a challenging experience.

Bad habits are often formed early, and in many cases, stay with a young player for a lifetime. But instructors can take some steps to ensure that their proteges learn the basics without falling into any bad routines.

We’ll give you a basic tennis instruction blueprint to help avoid some common coaching pitfalls, along some beginner tennis drills to help your newbie students reach their potential as quickly as possible!

In most programs, instruction follows a somewhat faulty sequence that defies common sense. Most teachers begin with the forehand stroke, followed by the backhand, volleys, and eventually, the serve. Even instruction books for beginners tend to follow this same basic order. Unfortunately, this sequence causes many of the problems we hope to avoid and defies common sense in many regards.

In teaching the forehand first, instructors often produce players who fear the backhand and believe it to be the more difficult stroke. Psychologically, the notion is often planted that backhands are more frightening. Later, this idea is reemphasized by strategically teaching students to pound their opponent’s backhand.

In many cases, the great majority of instructors imply, if not outright say, that the forehand is easier to learn or to hit. An instructor using common sense would disagree. In physical terms, the backhand is an easier, more natural shot to teach.

Secondly, by teaching ground strokes before volleys, instructors often make the volley more difficult to master. How many times have you heard the instructor (or the player himself) say, “Don’t swing at your volleys!” Perhaps teaching players how to swing the racket, then trying to keep them from swinging is not such a great idea. Teaching the fundamental strokes in the “traditional” order may create problems that could easily be avoided by using a little common sense and the following order.

A note on tennis ball shooter machines: They can be useful in beginner drills, but they’re not necessary if you have patience and a large supply of balls. Check out our list of tennis ball machine drills.

Common sense dictates that early success builds confidence in the player. Instead of placing the student on the baseline forty feet from the net and hoping he can connect with a few forehands that might go over the net, the instructor should put the player at the net and feed him soft tosses that will be easy to put in play.

From the ready position, the player should be taught to turn the shoulders and with little or no backswing, punch the ball with a very short stroke. The instructor should have the student check and assume a forehand grip, and feed him forehands until he is comfortable with the stroke, then repeat the process with the backhand.

Next, he should have the student practice alternating between forehand and backhand volleys by shadow stroking or pantomime. Finally, he should toss balls alternately and then randomly from side to side.

This is a very common sense approach. The student hasn’t been taught a backswing or a long stroke that would complicate the teaching of a very simple shot, the volley. Additionally, the student has been given confidence by seeing early success. He should complete the volley lesson successfully and be eager to progress to the next lessons.

2. Teach the backhand before the forehand.

Following this method, students will love to hit backhands and will find that many of their future opponents will give them plenty of backhands to crush.

Think about the strategy usually taught to our more advanced students. Aren’t students consistently told to hit to their opponent’s weakness and usually told that means their backhand? The result is that most players hit forehands down the line really well and learn to easily stroke their backhands crosscourt. Isn’t that why lefties upset the natural rhythms of most players?

Why is the backhand easier and more natural? The true advantage of the backhand is in the stroke itself. When executed properly, the player goes from an uncomfortable, cramped position, the backswing, to a comfortable, open position with the swing and follow-through. Once the player recognizes the beauty of this stroke, he will never again fear to hit a backhand.

Common sense instructors acknowledge the difficulty of the backswing in the very beginning. They teach the student to reach across his body, keeping the elbow in, and get the racket handle beyond his hip. They make sure that the racket head is level or above the handle and pointing toward the back fence. Once the stroke begins to move forward, everything should feel open and free. They teach students to make contact ahead of the front hip and with solid contact, it should feel great!

3. Next, teach the forehand.

As mentioned above, the backswing should be the easy part. The instructor should have the student take the racket back with the racket head level or above the handle and pointing at the back fence. He should emphasize a long complete stroke with ball contact ahead of the body.

Finally, he should not let the student follow through by swinging “around” the body, but rather have the student concentrate on following through with the handle allowing the head of the racket to stay outside of the handle, not wrapping around the body like a baseball swing.

4. Students can now be taught the serve.

Most instructors prefer to have students begin with the racket already dropped into the “back scratcher” position. This allows students to concentrate on the toss and on making good contact. Once the student has become comfortable with this beginner serve, they can begin to learn the complete stroke.

Benefits of This Common Sense Approach

By teaching volleys first, students are able to experience immediate success and avoid the bad habit of swinging at the ball (using a stroke previously taught and practiced too soon).

Next, teach the backhand and emphasize a free and open swing. The forehand follows and students now have the basic strokes and are able to rally.

Finally, teach the serve. Whether the instructor teaches a series of four to five sessions or a more complete set of lessons, teaching the strokes in this order is logical. Try it out with the aspiring tennis star in your life!

You can also practice other aspects of your game, like footwork, lobs, overheads, and racing side to side on the baseline.