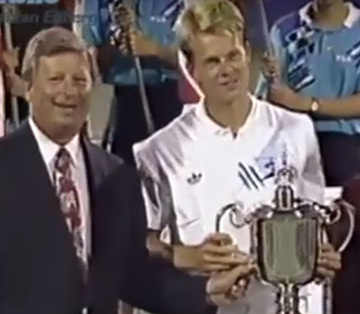 Big serves and big forehands get all the attention, but having a killer backhand can be a great way for pro tennis players to outsmart and frustrate their opponents.

When the question of who had the best backhands in men’s tennis history comes up, the names often raised as Connors, Borg, and Rosewall, among others. Here’s our analysis of the five players whose backhands were the most dominant of their eras.

Consistently ranked as the greatest player before WW2, Don Budge was the first player to achieve the true Grand Slam in 1938. His all-around playing style and consistency made him a dominant opponent. Even in his later years and post-war career, he still outshone many of his younger counterparts.

Budge’s main weapon was his backhand that is considered by many the greatest of all-time. The power he generated and the moderate amount of topspin he put on it meant that he could relegate his opponents to the baseline.

This resilient Australian player held many records and appeared to improve his game with age. Rosewall still holds the record for being the oldest player to win a Grand Slam singles title at 37 years and 2 months. Though Rosewall wasn’t the most muscular or physically imposing players, he relied on his stunning backhand to dominate rallies.

Rosewall won points with a combination of clever backhand shots and amazing net play. He could create a powerful backhand shot, but he also had a mean slice backhand, which effectively took the bounce off the ball and kept foes from approaching the net.

Jimmy Connors’ on-court antics sometimes earned him the reputation of being the brat of professional tennis. But he remains one of America’s most exciting and successful players in history.

The lefty Connors employed a deadly two-hand backhand that remained consistent throughout his long career. He had a tendency to hit shots flat and low, which went against the style of his time. The backhand was partially responsible for his shocking and memorable run to the 1991 U.S. Open semifinals as a 39-year-old.

One of the greatest Swedish players of all time, Stefan Edberg amassed 41 career titles, including six grand slams. He also contributed to four Davis Cup titles. A serve and volleyer, Edberg had a lethal backhand mainly due to the accuracy he demonstrated when hitting passing shots or cross-court winners.

Edberg’s shot stands as one of the most controlled backhands of all-time. If you’re a beginner, study Edberg’s backhand (see YouTube video above) to get a great sense of the fundamentals.

Swede Bjorn Borg began as a teen sensation and went on to capture six French Open and five Wimbledon titles. Borg’s superstar status transcended the sport during the ’70s, and he remains an endearing character.

Bjorg possessed a highly unorthodox backhand where he would hold the racket with both hands, but use his right hand only to generate the shot power and follow through. This created an immensely powerful shot in which the balls were hit hard and with a great deal of topspin.