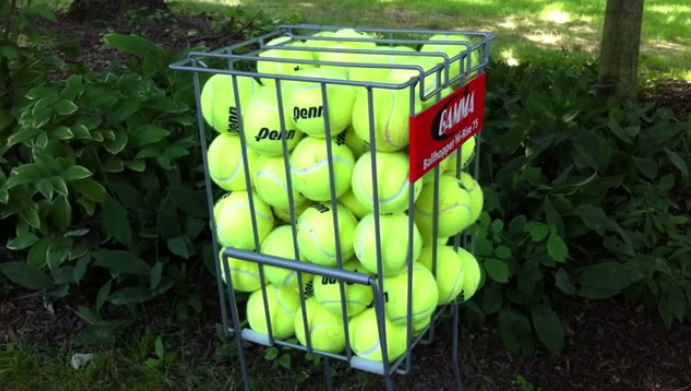 You’ve gotta love the tennis ball hopper. Whether you’re a tennis coach helping younger players learn the game, or just a casual player who practices regularly, this piece of equipment can save you a lot of time and effort.

If you’re not familiar with how to use a ball hopper, it’s quite simple. Just grab the basket by the handles and push down on the balls lying on the court. The balls will go through the wire and up into the basket. It’s a big time-saver and keeps you from having to bend down to collect dozens of balls manually.

Most hoppers have handles that fold down and become legs so that the basket turns into a stand. Nifty! For the serious tennis player, having a hopper for practice is just as valuable as having a tennis ball shooter.

Since hoppers are all designed in similar fashion, it doesn’t matter which one you buy, right? Wrong! Some ball hoppers are more sturdy, more user-friendly, and more affordable than others.

Which tennis ball hoppers, carts and mowers give you the most bang for your buck? Here’s our rundown of the best of the bunch, with tennis basket reviews and current 2016 information for each.

Note: Use of the term “best” in this article is meant only to reflect one writer’s opinion. Always do your own research when deciding which products to buy.

Pete Sampras is a legend. Many observers believe that the 7-time Wimbledon champ was the best male player in history before Roger Federer came along. That doesn’t automatically mean that any item Sampras puts his name on is a great product. But in this case, the Sampras Ballport Tourna 80 lives up to its namesake.

What separates the Sampras Ballport from the competition? Start with its construction. Unlike many other hoppers that are made from metal wire, Pete’s ball hopper is made from polypropylene, a durable, tough material that makes this hopper likely to outlast most others on the market. Just like Pete, this thing is tough as nails.

The hopper is assembled by connecting several screws at the side and base. The rods on the base spin freely, making for easy ball pickup and no scuffing or damage to the balls themselves. With its lightweight and effortless pick-up design, this basket has virtually no flaws.

The Tourna Ballport Pete Sampras is relatively inexpensive. It’s actually kind of astonishing that such a quality product is so affordable. There’s also a Tourna Mini-Ballport that holds 36 balls, but it’s only a few bucks cheaper, so you’re better off going with the substantial 80-ball model.

For those on a budget who want a tennis ball hopper, the Wilson 75 might be your best bet. You’ll get a no-frills basket that is lightweight, easy to assemble and capable of holding 75 tennis balls.

The Wilson 75 Pick Up Hopper folds down to a compact size, so if you have limited space in your garage or apartment, you can easily disassemble the basket when you’re not using it. It’s only about six pounds or so, much less than some other hoppers.

Wilson, of course, is a well-known brand throughout the sports world, as the company manufactures everything from basketballs and footballs to golf clubs and tennis rackets. Wilson is not a high-end luxury brand, but it’s a respectable brand that should give the buyer confidence they are getting a well-made product.

The main complaint regarding the Wilson 75 is that its handles can sometimes become detached, requiring the user to put them back in. The Wilson 75 isn’t as sturdy as some of the more expensive models on this list, but if you’re specifically seeking a cheap tennis ball hopper, this is one we recommend.

Looking for something with wheels? The top-selling large hopper cart is Gamma’s EZ Travel Cart 150. The large wheeled basket can hold a whopping 150 balls at once – perfect for coaches, instructors, or those who run tennis leagues. That’s why it is billed as “the ultimate portable teaching cart.”

This cart’s features are numerous: It has locking wheels, so it stays in place on the court exactly where you leave it. The nylon bag has a mesh lid that zippers up to secure the balls for easy transport. It takes mere seconds to close up the bag and be on your way. The wheels also fold up and fit inside a compact carrying case.

Sturdy and portable, the Gamma Travel Cart 150 has virtually no drawbacks, so if you’re in the market for a large cart with a huge tennis ball capacity, we highly recommend this one. Just one note, which will be obvious to anyone who plays tennis frequently: This is not technically a ball hopper since you can’t pick up balls with it. It’s more of a travel cart and ball storage basket. If you need an actual hopper, consider buying one of the hoppers listed above or the mower or ball tubes below.

Sometimes a tiny little ball hopper won’t do. When you need to go big, take a look at the Oncourt Offcourt Ball Mower. As it name implies, this gadget can collect up to 350 tennis balls, and its design and shape are the same as a lawn mower, but with an added rack that doubles as a cart.

The Oncourt Offcourt is constructed from an aluminum frame, and its arms spread wide to 47 inches, which means that when you use the mower, it will collect every ball within a width up to four feet. That’s a massive time saver compared to the smaller hoppers which are only about a foot wide and can only collect a couple balls at a time.

Because of its price, this ball mower is for the serious tennis player who would rather spend his or her time practicing and sharpening their on-court skills rather than wasting time by walking around collecting balls. The mower is a long-lasting piece of equipment, so make the investment if you value your time enough to spend a couple hundred extra dollars for long-term gain.

If you want to see how tennis ball mowers work, check out this video (it’s a different brand, but the same concept):