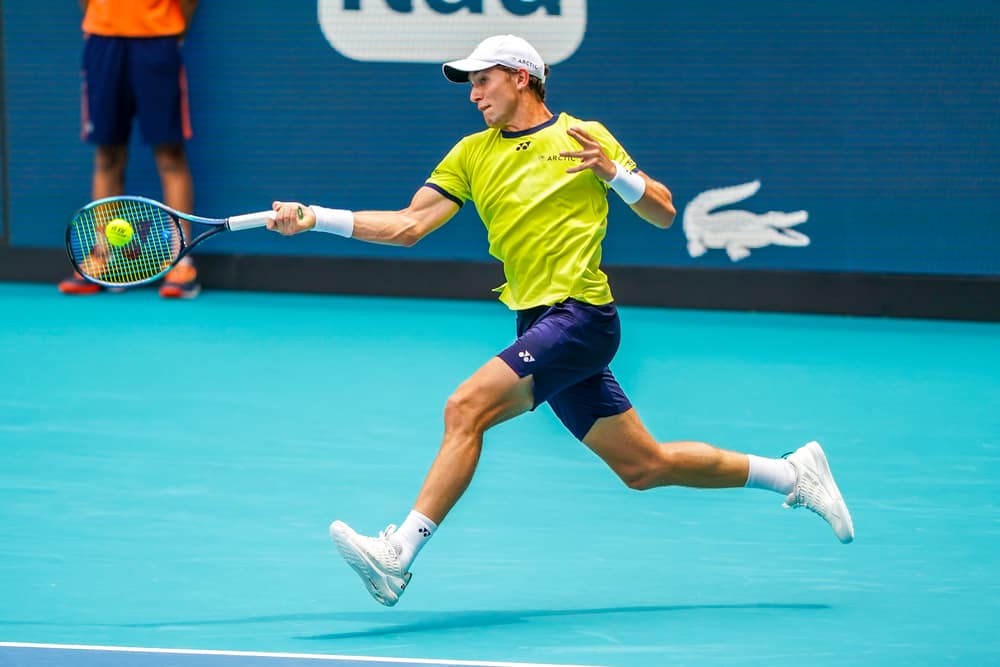 Can you volley a serve in tennis? While you can volley and serve, volleying a serve is a completely different question. There are a lot of rules in tennis, which can make it tricky to find all the right answers.

What does it mean to volley a serve?

Rules of the serve in tennis

In tennis, the serve is the shot that starts each tennis point. You get two chances to put the ball into play. When serving the first play, you should stand behind the baseline between the center mark and the right sideline. To serve, you will hit the ball diagonally into the service box on one side of the net without stepping on or over the baseline before hitting the ball. If you miss both shots, then you lose a point.

Rules of volley in tennis

A volley in tennis is a shot where the ball is hit before it bounces on the ground. Usually, a volley occurs closer to the net, but it can also happen near the middle of the court or closer to the baseline. The primary goal of a volley is to go on the offensive and reduce the amount of time your opponent has to react.

A volley can also reduce the chances of a bad bounce, as it doesn’t have time to hit uneven surfaces such as grass or clay. Good hand-eye coordination is needed to make a volley, as it is a difficult shot.

Can you volley a serve?

The simple answer? No. While hitting that first ball out of the air may be desirable, it is not allowed. The server’s ball must hit the ground inside the correct service box for the point to count. If the serve is hindered in any way, such as touching your clothing or body, then you lose the point. It didn’t matter if the serve would be in or out of the court.

What makes a serve illegal in tennis?

If the ball hits the net and lands outside the correct service box, it is a fault. A served ball hitting a post is also a fault. If you run up while serving the ball, you lose the point.
You are not allowed to throw the ball up with your racquet unless you have a disability that makes that necessary. If you touch the baseline or court with your foot, then you lose the point. Furthermore, it is a fault if you let the ball touch the ground before hitting it.

What if I hit the ball unintentionally?

Uh oh! What if you knock the ball by accident? If the hindrance were deliberate or on purpose, the other team would win the point automatically. You can replay the point if it was accidental or something outside of your control.

What if the ball hits the net before hitting me?

When does the ball have to bounce in tennis?

When to hit a volley in tennis?

Is there ever a good time to hit a volley? Unlike in a serve, you are allowed to volley during the other portions of the match. The reason a player will move up and hit a volley, even though they have to get closer to the person who might hit them with a ball, is that it takes time to react away from the opponent.

For example, if a player hits the hardest shot they can from the baseline (the very back of the court), it takes one second to get to the other player. Now, if the player could move up to the net (in the middle of the court) after that shot and hit a volley, that is half the speed. Why would you want to do that instead of another full-power shot?

It’s because you are decreasing the distance between you and your opponent by half. This means that it gets to them two times faster. You are also less likely to miss your shot at the net.

Whether you are new to tennis or have a lot of experience, volleying is a great tool to use. While the rules can be tricky at times, volleying can reduce your opponent’s chance to react. This gives you a greater chance of scoring a point.

If you have good hand-eye coordination and flexibility, then volleying might be a great choice for you. Once you get the hang of all the rules, volleying is a great asset. Now, go out and give it a try for yourself!