How long are tennis matches? We analyzed all of the data. 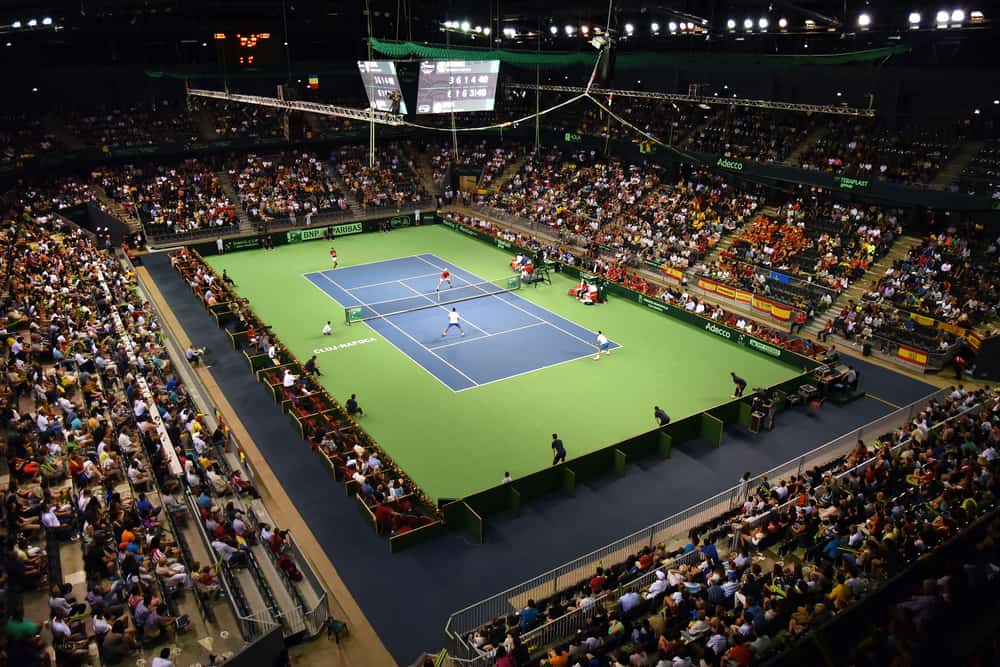 A tennis match can be anything from a quick exhibition to an epic battle stretching for hours. Most tennis matches fall somewhere in between those two extremes. Various factors impact their duration.

If you’re wondering how long the average tennis match is, what affects the duration of a match, and whether there are differences between types of tennis matches, read on. We’ll tell you everything you need to know about the length of a tennis match.

How long does a tennis match last?

A tennis match can last anywhere from a few minutes to several hours. The length of the match depends on the format of the game. For example, a singles tennis match played with a best-of-three set will generally last between one and three hours.

Related: How long is a set in tennis?

However, if the match goes to a tiebreaker, it could potentially last even longer. Doubles tennis matches are typically shorter, as each set is only played to six games instead of the standard seven. Ultimately, the length of a tennis match depends on a number of factors, and there is no one-size-fits-all answer.

For an overview of the longest tennis matches in history, check out NBC Sport’s article here.

What is the longest men’s tennis match?

That’s right – the fifth set alone lasted 8 hours and 11 minutes. In total, the match featured 168 games, with Isner winning 112 of them. It’s no wonder that both players were utterly exhausted by the end. Consequently, the record for the longest tennis match is unlikely to be broken any time soon.

What is the longest women’s tennis match?

The longest women’s tennis match was between Jean Hepner and Vicki Nelson. The match went on for 6 hours and 32 minutes, with Hepner eventually coming out victorious in the fifth set.

That year’s tournament was notable for several other reasons as well—it was the first time that a tiebreaker was used in the final set, and it was also the first time (and to date, only) that a woman won a Grand Slam singles title after being down 3-0 in the final set. Hepner and Nelson’s marathon match remains the longest in tennis history.

The New York Times interviewed Hepner and Nelson about the legendary match here.

Weather conditions can impact the length of a tennis match. If it’s really hot, players can develop fatigue and make more mistakes while experiencing heat exhaustion or heat stroke.

For a more in-depth look into how heat can affect players during a match, take a look at BBC’s article here. The ball also travels faster through the air in hot weather, making it more difficult to control.

On the other hand, if it’s cold, the ball doesn’t travel as fast, and players are less likely to make mistakes. However, they may also struggle to generate enough power to keep the ball in play. In general, windy conditions are the most challenging, as the wind can make it hard to control the ball.

Ultimately, weather conditions can significantly impact the length of tennis matches, with hot weather tending to shorten them and cold weather lengthening them. Above all else, the safety of the players is the most important.

How long is a college tennis match?

A college tennis match is played best in three out of five sets. The first player to win six games in a set wins that set. If the score in a set gets to 6-6, then there is a tiebreaker. The tiebreaker is usually played first to seven points, but it can be first to ten if both players agree to it before the match starts.

The critical thing to remember is that there has to be a winner in every set—there are no drawn sets in college tennis. So, if you’re wondering how long a college tennis match might last, the answer is anywhere from around an hour and a half to several hours.

The minimum amount of time that a college tennis match can take is one hour and 48 minutes. However, if tiebreakers decide all three sets, then the match can last up to two hours and 24 minutes. But one thing’s for sure–it’ll be an exciting match to watch from start to finish!

How long is a high school tennis match?

Are there breaks in tennis matches?

There are chances to take breaks in tennis matches. For example, players have up to 90 seconds between games to rest and recuperate. During this time, they can receive coaching, hydrate, and adjust their equipment. There is also a long break between sets, which allows players to further rest and strategize with their team.

In addition, the umpire may call for a heat or medical timeout if the weather conditions are extremely hot or cold. These breaks ensure the players are safe and can play at their best. As a result, breaks are an important part of tennis matches.

Various factors impact the duration of a tennis match. Even if there are differences between types of tennis matches, the length of a game also depends on the skill of the players and weather conditions. Make sure to keep hydrated and refreshed for your match.

Remember that breaks are allowed at various moments during the game. Think about the legendary tennis players mentioned in this article—maybe someday that will be you!

Now that you know how long a tennis match is, get out there and enjoy the game!