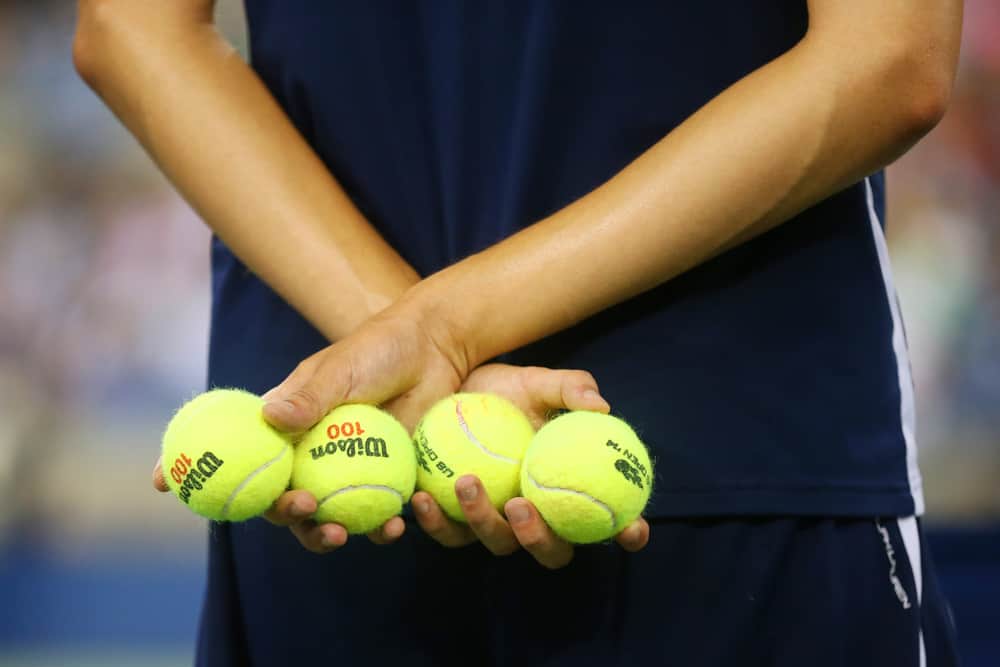 The average number of tennis balls used in a match varies depending on a number of factors, such as the level of play and the length of the match. In general, however, a professional tennis match can use anywhere from 6 to 12 balls. In this article, we will get into the details of how tennis balls are rotated and used throughout various aspects of the game.

The average number of tennis balls used in a match

At the professional level, tennis balls are typically changed every nine games (or every seven games in the case of a tiebreak) to ensure they remain in good condition. This means that in a typical professional tennis match, a total of 6 to 10 balls may be used.

How many sets are played in a match?

How much time lapses between ball changes?

The amount of time that lapses between ball changes in a tennis match can vary depending on factors such as the level of play, the court surface, and the conditions. In most cases, balls are changed every nine games or approximately 15 minutes (or every seven games in the case of a tiebreak) to ensure they remain in good condition.

The number of balls used in a professional tennis match may be affected by the level of play, the court surface, the weather, and the overall length of the match. Higher levels of play, slower court surfaces, hot and humid conditions, and longer matches can all cause balls to lose their bounce and ability to fly straight more quickly.

This may result in more balls being used in a tennis match. It is important to carefully monitor and change the balls regularly to ensure that they are in good condition and to maintain the quality and safety of the match.

1. Length of the match

2. The playing style of the players

One of the most important things to understand about the playing styles of tennis players is that there are many different approaches to the game. Some players are known for their powerful serves and their ability to hit winners from the back of the court, while others are known for their speed and their ability to outmaneuver their opponents. “Power players” typically have a strong physical build and a large wingspan, which allows them to generate a lot of power and speed on their shots.

Players known for their speed and ability to outmaneuver their opponents are often referred to as “counterpunchers.” These players typically have a smaller physical build and a more compact swing, which allows them to move quickly around the court and hit accurate shots.

In addition to power players and counterpunchers, other playing styles are commonly seen in tennis. For example, some players are known for their consistency and ability to hit many balls back into play. In contrast, others are known for their versatility and ability to adapt to different situations. Overall, each player’s style may affect how often balls need to be replaced, as these categories dictate how aggressively the tennis balls are handled and how much action they get during each set.

3. Condition of the court

The court’s surface is one of the key factors that can affect how often tennis balls need replacement. Different court surfaces, such as clay, grass, and hard courts, have different playing characteristics, which can affect how the ball bounces and the game’s speed. For example, a clay court is typically slower and has more bounce than a grass court, which can affect how players approach the game.

Altogether, the material on the court and surrounding weather conditions during a tennis match can present the need for new tennis balls more or less frequently. Rough terrain will cause the ball to become dirty, worn, or otherwise unusable more quickly.

How often are tennis balls changed during a match?

During a tennis match, tennis balls are changed after seven games and then every nine games after. This is the case for tennis balls in Grand Slams, ATP, and WTA tournaments. The International Tennis Federation (ITF) must also approve the tennis balls.

Are there exceptions to the number of tennis balls used in a match?

The only exceptions to ball changes occurring after seven games and then nine games thereafter are during tiebreakers and if players serve out of order.

What happens to used balls after a tennis match?

Tennis is a thrilling and dynamic sport that requires a wide range of skills and strategies. The fast-paced nature of a tennis match makes it entertaining to watch from the audience. The number of tennis balls constantly rotated during professional tennis events may seem unusual to those who are new to the sport.

In summary, the exact number of tennis balls used during any given match will vary based on a few key factors. These include court conditions, the length of the match, and how each player typically handles the ball based on their playing style. On average, you can expect to see between 6 and 12 tennis balls being used in a professional tennis match.

After a tennis match, used tennis balls discarded during gameplay are usually recycled and will serve another purpose in the future. Similarly, any remaining balls in good condition may be collected for practice or another match.

We hope this article helped you understand another important aspect of tennis. Keep reading our blog to enhance your love for the game and for more insightful tennis posts.