The ultimate guide to playing doubles tennis. Learn how to play like a pro and dominate your opponents. 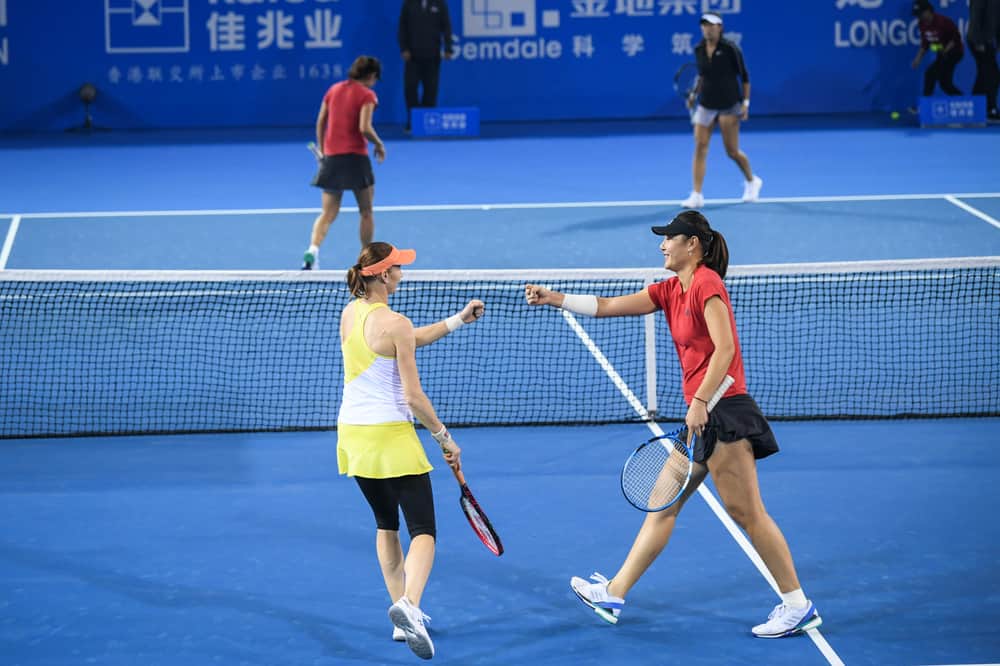 Doubles in tennis is a game between two teams of two players on the court. This differs from singles games, which have only one opponent on either side. Because doubles tennis is not as common, the rules can be confusing. Let us walk you through the ins and outs of playing doubles tennis.

How to play doubles tennis

Doubles tennis is played in teams of two instead of just one player on each side. The gameplay rules are generally the same as in singles tennis, with a few exceptions. Doubles tennis has some particular rules regarding serving and positioning the players on the court that only apply to two-player teams. Scoring can differ in doubles depending on whether you follow regular or no-ad rules.

In regular tennis, it takes six points to win a set or a match. However, the winning player must also be ahead by two additional points. For example, if the score is 6-5, you will need one more point to win at 7-5.

No-ad (no advantage) scoring eliminates this 2-point advantage rule. If the second point is tied between teams (deuce), the next team to score wins the game or set. When doubles teams are tied at 6-6, it would only take one more point to tip the scales.

Other than the additional player and optional scoring rules, there are a few more minor differences to be aware of when playing doubles tennis. These include the number of sets and rules for serving, positioning, returning, and switching sides.

How many sets are there in doubles tennis?

Doubles tennis consists of one to three sets. Most professional matches follow the general “best 2 out of 3” rule, with one small adjustment. Instead of playing a full third set from beginning to end, it’s usually replaced with a 10-point tiebreaker.

If you’re playing doubles tennis with friends, you may keep the game short based on how much time you have to play. In this case, you may choose to play only one set.

How to serve in doubles tennis

In doubles tennis, the player who starts with the first serve continues for the entire game. This can only be changed at the beginning of each new game and alternates between teams in a specific order, so everyone has the chance to serve.

For example, if a member of the opposing team begins with the first serve and you serve in the second game, the other team member on the opposite side will go next, followed by your teammate. This cycle repeats itself in the same order for each subsequent game until there is a winner.

This serving order doesn’t have to stay exactly the same throughout the entire match, but it can only be changed at the beginning of each set. Just like in singles tennis, a new set begins after one side wins a minimum of six games.

How to play the third set in doubles tennis

The third set is another possible variation in doubles tennis, depending on where you are playing. In professional doubles tournaments, this set is generally used as a tiebreaker.

The tiebreaker is played until one doubles team reaches 10 points in total. During a tiebreaker game, teams switch sides of the court when six points are scored. For instance, a score of 4-2 will signal a rotation.

Similarly, the serve is alternated between teams after two points are scored. This will go on until one side wins. A 2-point lead will be required to win by regular scoring rules, but this will not apply when no-ad scoring is applied.

Another key difference between singles and doubles tennis is the positioning, or where players can stand on the court at each point of the match. Remember the following rules when you’re on the serving or receiving side.

When serving in a doubles game, you will stand on the serving line as usual. Based on the rules, your partner can stand anywhere, but there are a few strategic positions most players choose during a serve. These include the net on a diagonal, on the baseline, and directly in front of the server. Also called “aussie formation,” the final position is a strategy to make the opponent hit the ball in a straight line down the court.

When the opposing team is serving, you may choose to stand on the baseline next to your partner or at the net on a diagonal from your teammate. During the serve, you are not allowed to stand in the same court as your partner—you must be on opposite sides for the entire duration of the serve. Once the serve is returned to the other side of the court, you are both free to move around.

Switching sides can be done in between sets of a doubles tennis match. You will need to return to the position you chose at the start of each game and won’t be able to switch until the set is over permanently.

During gameplay, there is no restriction on moving around the court and switching sides with your partner as long as the serve has already been returned to the other side.

Related: How to be a good doubles partner.

Can the same player from each side serve in doubles tennis?

The same player from each side cannot serve consecutively in doubles tennis. After you serve, a player from the opposing side will follow. Your partner will be next in line, followed by your other opponent.

The rules of doubles tennis can be more difficult to follow than those of singles tennis, especially if you’re used to playing against one opponent. Although the rules of gameplay are nearly identical, doubles can be a challenging adjustment for tennis players.

How many sets do you need to win a doubles tennis match?

Doubles tennis matches generally follow the “best 2 out of 3” rule. A lead of two points may or may not be necessary, depending on if you’re following regular or no-advantage rules.

If you’re familiar with the standard rules of singles tennis, you should have no problem adjusting to doubles. Doubles are just like regular tennis, with the addition of an extra player on each side and a few particular rules.

Doubles tennis can have 1 to 3 sets and follows regular scoring rules in most cases. You may eliminate the 2-point advantage rule (no-ad scoring) or cut the game short to a single set when playing for fun.

The third set is often played as a 10-point tiebreaker in doubles tennis. When playing a 2 vs. 2 tennis match, pay special attention to the rules for serving, returning, positioning on the court, and switching sides.

If you’re not yet comfortable with the rules of doubles tennis, don’t sweat it! With continuous practice and more blog posts from Tennis Universe, you and your partner will be playing like pros in no time.