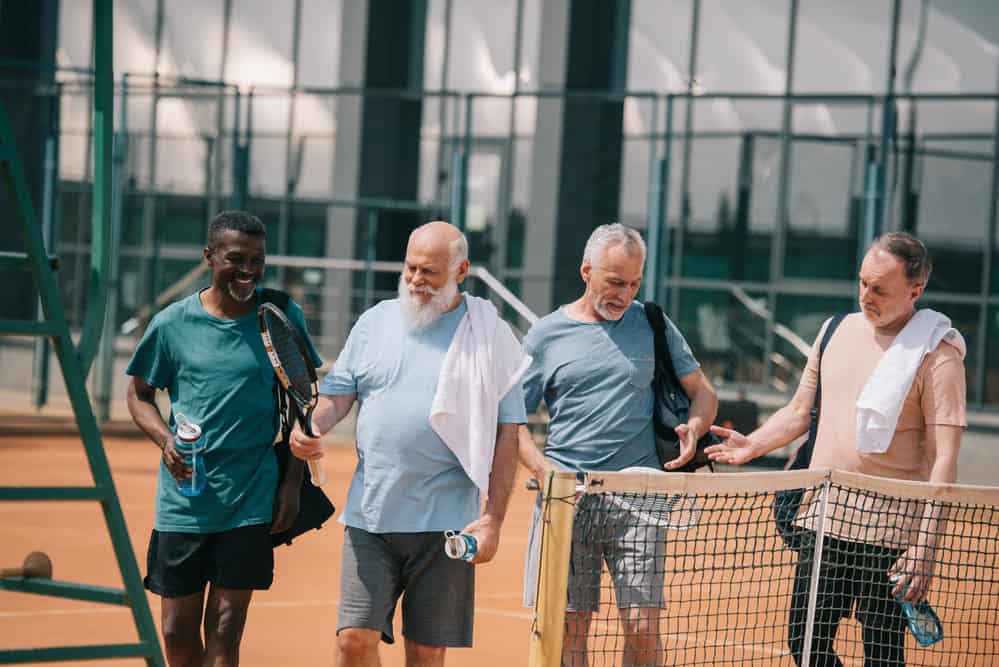 Tennis has long been perceived as a sport for wealthy individuals, associated with exclusive clubs, high-priced equipment, and expensive apparel. But is this perception truly accurate? This post will cover the cost of playing tennis, the income of professional players, and the accessibility of the sport for players of all income levels.

The cost of playing tennis

One factor that contributes to the perception of tennis as a rich person’s sport is the cost of equipment and apparel. Tennis rackets can range in price from a few hundred to several thousand dollars, and players also need to purchase balls, shoes, and other accessories. Additionally, players may need to invest in specialized clothing and shoes, which can also be expensive.

Membership fees for private clubs are also associated with playing tennis. These clubs often have expensive initiation fees and monthly or annual membership dues, which can financially burden some players.

Travel expenses are another contributing factor to this stigma. Many tournaments are held in different cities or countries, requiring players to cover the cost of transportation and accommodation. This can be especially burdensome for amateur players, who may have a different level of sponsorship and support than professional players.

Along with these direct costs, there are indirect costs associated with playing tennis. For example, players may need to purchase or rent a car to travel to practices or tournaments, or they may need to pay for childcare or other expenses related to managing their time commitments. These indirect costs can increase over time and be a barrier for some players.

It’s also worth noting that the cost of playing tennis can vary widely depending on where you live and the resources available in your community. In some areas, there may be more affordable options for equipment, coaching, and facilities, while in other areas, these costs may be higher. Players should consider these factors when budgeting for their tennis expenses.

The income of professional tennis players

While the top players in the world can earn millions of dollars per year in prize money and endorsements, the financial reality for lower-ranked professional players is often very different. Players outside of the top 100 in the world may need help to earn a living wage, as they often have different sponsorship opportunities and may earn less prize money. This can make it difficult for lower-ranked players to afford the costs of traveling and competing on the professional circuit.

The financial struggles of lower-ranked professional tennis players can be heightened by the fact that they often have to cover their expenses while on tour. These include travel, accommodation, and food, which can add up quickly and eat into already limited earnings. Players may also need to pay for coaching and training, which can further strain their finances.

The financial struggles of lower-ranked players can lead to a high-stress level, as they may feel pressure to perform well to earn prize money and secure sponsorship deals. This can make it difficult for players to focus on their training and performance, potentially impacting their chances of success on the court.

Even players within the top 100 may need help earning a living wage, as the competition for prize money and sponsorship opportunities can be fierce. This can make it difficult for players to sustain a long-term career in professional tennis, as they may need to supplement their income with other sources.

The accessibility of tennis

Despite its reputation as a wealthy person’s sport, tennis can be accessible to players of all income levels. Many cities and communities have public courts open to the public and free to use, allowing players to practice and play without incurring costs. These parks and recreational centers have tennis courts that the general public can use.

Many facilities also offer group lessons or clinics at a lower price than private coaching. Similarly, some organizations and programs aim to make tennis more accessible and affordable for people of all income levels. These initiatives may offer scholarships or reduced fees for equipment and lessons and partner with local clubs or facilities to provide low-cost options for players.

While the cost of playing tennis can be a barrier for some, it’s important to remember that resources and opportunities are available to make the sport more accessible. With research and planning, players can find affordable equipment, coaching, and facility options.

Is being a tennis player expensive?

Being a tennis player can be expensive, especially for those just starting or trying to improve their skills and compete at higher levels. The cost of equipment and apparel, such as rackets, balls, shoes, and specialized clothing, can add up quickly. Additionally, membership fees for private clubs and the cost of hiring a personal coach can also be significant financial burdens. However, it’s important to note that more affordable options are also available for those interested in playing tennis.

How much do professional tennis players make?

Do you need money to play tennis?

In general, having a lot of money to play tennis is optional. While some of the expenses associated with the sport can add up, there are also many ways to reduce these costs and find more affordable options.

For example, players can use public courts, join community programs or organizations that offer reduced fees, or consider sharing equipment or coaching costs with other players. Ultimately, the cost of playing tennis will depend on various factors, including the player’s level of commitment and the resources available in their community.

Professional tennis players generally do not pay to enter tournaments, as they are typically invited to participate based on their ranking or performance in previous events. However, they may be required to pay a fee to join the association or organization that sanctions the tournament, such as the Association of Tennis Professionals (ATP) or the Women’s Tennis Association (WTA). These fees are usually paid by the player’s agent or management team and are generally not a significant financial burden for professional players.

How much does it cost to start playing tennis?

The cost of starting to play tennis can vary widely depending on various factors, including the player’s age, level of experience, and goals. For a beginner just starting, the initial costs may be relatively low, as they may only need to purchase a few essential pieces of equipment, such as a racket, balls, and shoes. As the player becomes more serious about the sport and begins competing at higher levels, the costs may increase significantly.

While it’s true that tennis can be a costly sport, players of all income levels can enjoy and succeed in the game. With the availability of public courts, community programs, and financial assistance initiatives, tennis is a sport that can be accessible to players of all backgrounds and income levels. So don’t let the perception of tennis as a wealthy person’s sport deter you—grab a racket and hit the courts!