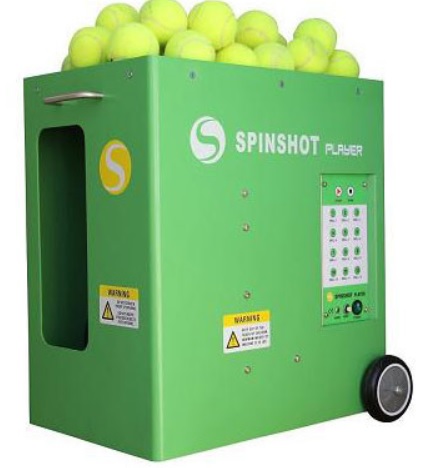 A tennis ball machine can be a massive investment, so it’s important to get the right one. We’ve reviewed several tennis ball shooters, including the Lobster Elite 3 and the Playmate Ace. But the best ball launcher machine we’ve found is the Spinshot Player.

Let’s get the bad news out of the way first: The Spinshot Player costs around $1700 on Spinshot’s website. It’s currently selling for less than that on Amazon.) That’s quite a bit of cash, so before shelling out that much dough, you want to be sure you’re getting a quality product. This one fits the bill.

From its numerous personalized features to its durability, the Spinshot Player gets high marks across the board. Read on to learn why we’re so high on this tennis ball machine.

Spinshot calls the Player “the most advanced battery operated portable tennis ball machine in the world.” And I won’t disagree with that. Far from the old days, when tennis ball machines just shot balls in one direction at one angle, the Spinshot Player has countless options to customize your practice and present a variety of shots and angles.

Players can change the height, direction, spin, and speed of the balls using the remote control or even Spinshot’s mobile app, available on both Android and iPhone. Better yet, you can create a personalized sequence with various shots and speeds mixed in there, to give you the most realistic game situation during your practice.

I really like the machine’s setting allowing you to change the spin from a flat shot to one with lots of backspin or topspin. Advanced players are able to use topspin and backspin to throw off their opponents, so being able to defend all of these shots will greatly improve your chances of earning victory on the court!

Next is the issue of feed control, which simply means how often you’re shooting balls out of the machine. This setting ranges from 2 to 10 seconds, so you can decide how quickly you want to be chasing down balls. You can also change the trajectory of the shots.

The battery holds a charge that lasts about 2-3 hours, which is plenty of time. You shouldn’t be practicing longer than that anyway, unless your name is Rafael Nadal or Novak Djokovic! The machine requires a 12V battery; the company recommends buying this from a local vendor.

The Spinshot Player is extremely portable. Unlike some tennis ball machines, which have awkward plastic wheels that are cumbersome and difficult to manage, this device is easy. It has two solid wheels and a sturdy handle to help you transport it from one place to another. The machine is smaller than some other ball shooters, make it easier to manage. And it’s still big enough to hold 120 balls.

Because it’s not constructed from plastic, the metal Spinshot is durable. It should last for many years if it’s handled properly. And remember to repurpose and recycle your tennis balls after they are dead.

Simply put, the Spinshot Player is currently the highest-quality tennis ball machine on the market. Players who want to take their games to the next level and want to have the best, highest-caliber level of practice should strongly consider picking up the Spinshot. We give it our highest recommendation.

CLICK HERE TO SEE THE SPINSHOT PLAYER ON AMAZON