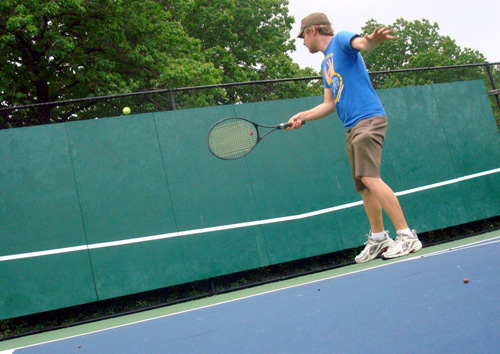 As a 40-ish tennis player (roughly 4.0 skill level), I am constantly facing people much younger and fitter than me. I’m not a superstar, but I have over time discovered how to squeeze the absolute most out of my limited playing ability. Often, this means beating these youngsters who hit much harder than me.

The wisdom of experience is a valuable thing! I thought it might be useful to share a few tips for how I compete with younger guys and sometimes take them down.

I’m fortunate to have good foot speed, and that frustrates a lot of opponents. My game is like Michael Chang or Arantxa Sanchez Vicario – I’m the fast defensive whiz who beats harder-hitting opponents by chasing down balls and frustrating them.

Speed can’t be taught, but footwork can. Learning to play at the net helps a lot, because then you get practice running forward and backward (to chase down those damn lobs over your head.) Baseliners only run side to side, so they don’t get the same footwork practice. Performing specific footwork drills off the court is also a good idea.

Have a well-rounded game

I was fortunate to start playing tennis as a kid in the early ’90s, back when players like Stefan Edberg and Martina Navratilova still played a serve and volley game. I emulated those players, charging the net whenever I could, even though my volleys weren’t great. They got better over time, which is always what happens with practice.

I learned to hit killer drop shots. I learned to move my opponent all over the court. I learned to return serve by watching Andre Agassi use his opponent’s power against him. I learned to mix in slice forehands and backhands to slow the pace and change up the attack. I learned new strokes like Cedric Pioline’s one-handed backhand up the line. When I get a short ball, I pounce by drilling it deep into the corner and charging the net, ready for the volley put away.

Most of today’s tennis amateurs (and professionals, for that matter) have no net skills or variety of shots. They’re all power, all the time. And if they’re having an off day, they have no Plan B. You always need a Plan B and Plan C on the court if you want to be successful.

Smarts can take you so far in amateur sports. You’ve got to surprise your opponent and keep them off-balance. Sometimes, I’ll charge the net late, just as my opponent is about to swing. They never see this coming, and it often results in an easy volley. And it gets in their head and keeps them guessing.

Anticipation is one of my biggest strengths in all sports (volleyball and floor hockey, too.) A majority of low-level amateurs give away their next move all the time. You just have to watch their eyes, watch their feet, watch the angle of their tennis racket, and learn their patterns. If my opponent tries a drop shot, I can inevitably see it coming. I’m running before the ball has even left their racket.

Tennis is half physical and half mental. Never let yourself get down. Remember that the last point is over and the only thing that matters is the next one. If you’re a defense-first, cerebral player like me, you can frustrate big-hitting opponents, because they can’t believe they’re losing to someone who they see as an inferior player. It gets in their heads, and I make sure to keep the pressure on at all times. I win the mental battle in 99% of my matches.

It blows my mind how many players try a drop shot against me, and then stand way back by the baseline. Anyone playing this sport should know the basics of Tennis Strategy 101. When you hit a drop shot, you have to come in! At least to the mid-court line. When people play drop shots against me, I chase it down, hit a drop shot back, and they stand there and watch me win the point because they never came in.

If they do come in, I use the sharpest angle possible to hit them with a drop shot back crosscourt that they’ll have a difficult time running down. Using your angles is another important part of knowing your fundamentals.

Now, these tips aren’t always going to work. There are times you’ll just run into a dominant power hitter on his game who will wipe you out 6-2, 6-1. But in analyzing my results on the court, I’ve found that these are the skills that have allowed me to compete with younger foes.

Having a variety of shots in your arsenal and outwitting your opponent are the two biggest keys to giving you the mental edge on the court. And it never hurts to do some beginner tennis drills from time to time, even when you’re experienced. Good luck!