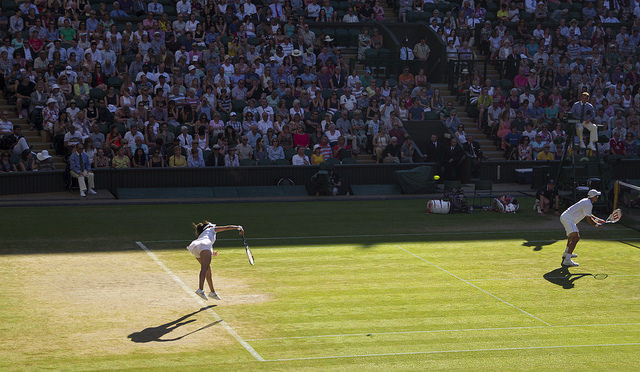 Doubles play in tennis is vastly different to the singles game. Even if you are an exceptional singles competitor, you cannot always expect to use those talents to transition to the doubles game. The pace of the game, the types of shot played, and the intricacies of the rallies require a whole different mindset and style.

1. Stay on the move and keep alert

Doubles is a fast-paced game, with more rapid-fire net play than you typically find in singles. It’s important to keep your concentration, stay on your toes, and be ready to move around the court in anticipation of the next shot. Successful doubles players have great reactions. They can pick off stray shots at the net and move quickly to intercept passing shots from the baseline.

Half of the doubles game is keeping your own movements controlled. The other half is watching and anticipating what your opponent is doing. This is true in singles as well – smarts and strategy are vastly underrated in the amateur tennis world – but in doubles, studying your foes throughout the match and learning their tendencies can make an especially huge difference. Since doubles players have less time to react to the actual shot that has been played, anticipation has to be a major part of a successful game plan.

In singles play, there are more open shots and straight play due to the availability of space – In doubles, however, you’ll generally want to play cross-court groundstrokes to minimize the chance of your shot being picked off by a volley. Throw in the occasional up-the-line blast to keep your opponent honest, but generally you’ll want to go cross-court and give your partner the best chance to react to the next shot.

4. Use slice and flat shots

As noted earlier, learning your opponents’ strategy is key in doubles. On that note, you’ll want to be unpredictable yourself. That means tossing in slice shots that reduce the bounce and flat shots that don’t provide a kick. Don’t stick with traditional heavy-topspin groundstrokes, as they will give the other team more time to chase down balls and more force to send them back at you. Remember, in doubles, it’s not about power – it’s about control and positioning.

Doubles is a social game. Communication and positive vibes are vital tools for being a good doubles partner. Nobody wants to play with a complainer or someone who plays the blame game. Give your partner a pat on the back frequently, and keep the feedback positive but not condescending. Be cooperative, and try not to get too intense. It’s never fun to play with someone who forgets that it’s just a game.

If you have no idea what shots your partner is likely to make or how they move around the court, you won’t know how to put yourself into the correct position to make effective plays. Take time to understand how their mind works, what shots they like to play, what their strengths and weaknesses are. The more you understand, the greater your teamwork will be. When serving, ensure you have a code set up to let the other player know where you intend to place the ball, whether you plan to come to the net, etc.

Embrace your partner’s style, especially if it’s different from yours. Contrasting styles can often make for formidable doubles teams. Keep these tips in mind if you want to improve your game and become a good doubles partner.