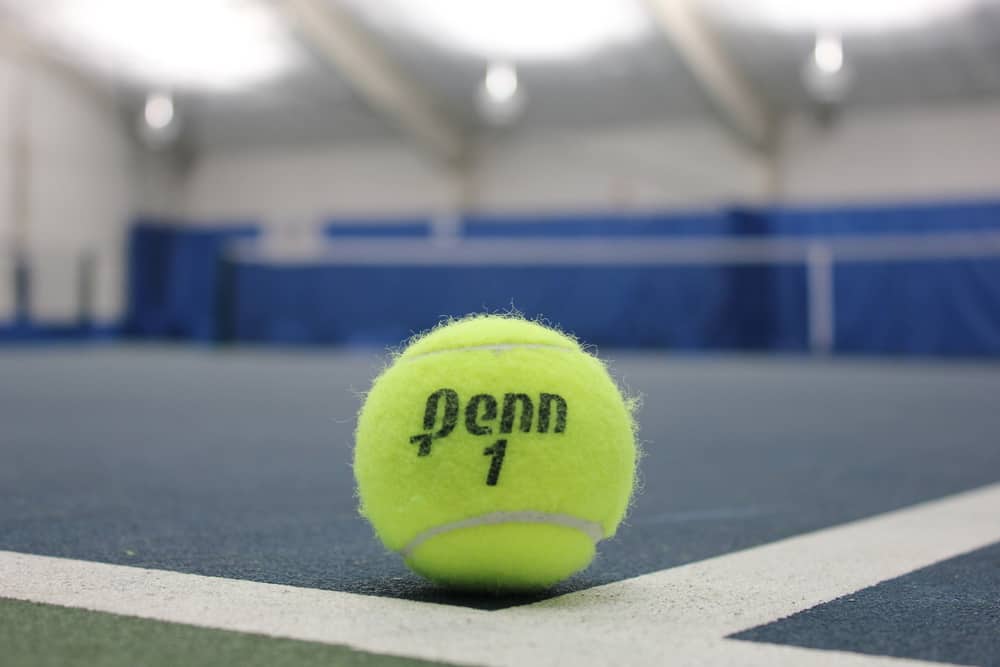 While playing tennis, you may have noticed the tennis balls are numbered, but why is that? With so many players on every court, tennis balls can be easily confused. As a result, they are numbered so each player can distinguish their tennis balls from others in the same or nearby court.

There are several reasons why keeping the same tennis balls on your own court is important. In addition to just separating balls during amateur tennis matches, professional tennis balls follow a similar numbering system based on the optimal court surface.

That said, numbered tennis balls are helpful to both players and officials in both professional and recreational environments. In this article, we’ll cover everything you need to know about why tennis balls have numbers on them.

The history of numbered tennis balls

Numbered tennis balls were originally introduced in 2002 when the manufacturing processes began to change. This was mainly implemented for convenience and gradually became the standard for most mainstream tennis ball manufacturers. When purchasing tennis balls for recreational purposes, you will likely come across balls numbered 1-4.

Some exceptions to this are professional tennis balls used for tournaments or practice, as there is little to no need to differentiate between balls in these cases. Balls made for pro-level matches don’t need to be numbered 1-4 since there is usually only one match being played at one time. Similarly, the numbering system isn’t relevant for practice balls that can be mixed up on the court when there is no official match going on.

The evolution of professional tennis balls occurred shortly after the French Open experimented with lighter balls to speed up playing time in 2000. Following a new requirement from the International Tennis Federation (ITF), balls were categorized into types known as 1, 2, and 3. The numbers originally represented three speeds: slow, medium, and fast.

This numbering system was initially believed to determine the level of bounciness, but this is not accurate. In fact, all tennis balls from the same brand maintain the same level of quality.

In reality, numbered tennis balls were created to help officials and players differentiate the balls by speed. They wanted to slow down powerful serves on hard courts and speed them up on clay surfaces at the same time. Balls separated into numbered categories introduced more consistency to the game.

While all types of tennis balls make contact with the racquet at similar speeds, type 3 balls, in particular, slow down the delivery time to the other side of the court. This gave the other player more time to react, which extended playing time by an average of 35 percent overall.

The larger (type 3) ball was also easier for players and officials to spot in the air. This improved accuracy in scoring and promoted longer rallies between both sides of the court, creating more entertaining matches for players and fans.

The purpose of the numbers on tennis balls

The primary purpose of the numbers on tennis balls is to easily identify who they belong to. This becomes important when multiple tennis matches are being played in the same location, such as a public park. But why does it matter if a ball from another court rolls onto yours and they happen to get mixed up?

If you have experience playing tennis at any level, you know that the quality of each tennis ball can vary based on brand, age, and usage amounts. The best tennis balls are brand new because the hairs are flat, giving you more of a competitive edge. With potentially lower-quality balls making their way onto your court, you will get used to the tennis ball you’re playing with and may adjust your serves and hits accordingly. If the ball is switched out midway, it can throw you off your game.

This is mainly relevant for recreational players, as only one match is played at a time in a professional setting. When you’re playing tennis on public courts, the general best practice is to note the number on the ball you’re using and compare it with nearby players. The 1-4 numbering system makes it easy to choose another type of ball that won’t get mixed up during gameplay.

A common myth in the world of tennis is that the printed numbers indicate their bounciness. On the contrary, the different types of numbered tennis balls are for the purpose of identification. For example, brands like Wilson, Penn, and Dunlop will retain the same properties between balls, whether printed 1, 2, 3, or 4.

The real difference comes when you compare numbered tennis balls between brands. In other words, two Wilson balls numbered 1 and 4 will perform exactly the same, but there will be a noticeable difference between a Wilson number 4 ball and a Penn number 4 ball.

Tennis balls manufactured with the classic 1-4 numbers are made for recreational players. Professional tennis balls follow a separate numbering system.

The numbers have different purposes in the case of special numbered balls, such as those used in major tournaments. The four main types of tennis balls matter for professional tournaments because they are categorized by which surfaces are best to use them on.

The four main types of tennis balls are:

Does every brand print numbers on their tennis balls?

Most manufacturers nowadays include numbers on their tennis ball products. Additionally, you can also purchase customized tennis balls featuring monogrammed initials or words. In these cases, tennis balls are not made with a number included.

Are tennis balls different if they have a different numbers?

If your tennis balls come in one set of the same manufacturer and model, the numbers are there to differentiate your batch from others. The number itself does not indicate any difference in the ball. Numbered tennis balls only have major differences when separate brands make them.

Numbered tennis balls were first introduced in the early 2000s for professional tournaments. Although many players believed the numbers indicated bounce levels, they were used to differentiate serving speeds and tailored for specific court surfaces. Larger balls became easier to spot for scoring accuracy and traveled slower, giving the other player additional reaction time and extending the duration of most tournaments.

Most commercially available tennis balls are numbered 1-4. These products are intended for recreational players to differentiate between balls that roll over from nearby courts. This is not necessary on the professional level, as only one match occurs at a time. Instead, professional tennis balls are placed into four categories based on the ideal court material.

Understanding the tennis ball numbering system is necessary for optimal gameplay and enjoyment of the sport. We hope this article about the reasoning behind numbered tennis balls was interesting and insightful. Keep reading our blog for more tennis facts!