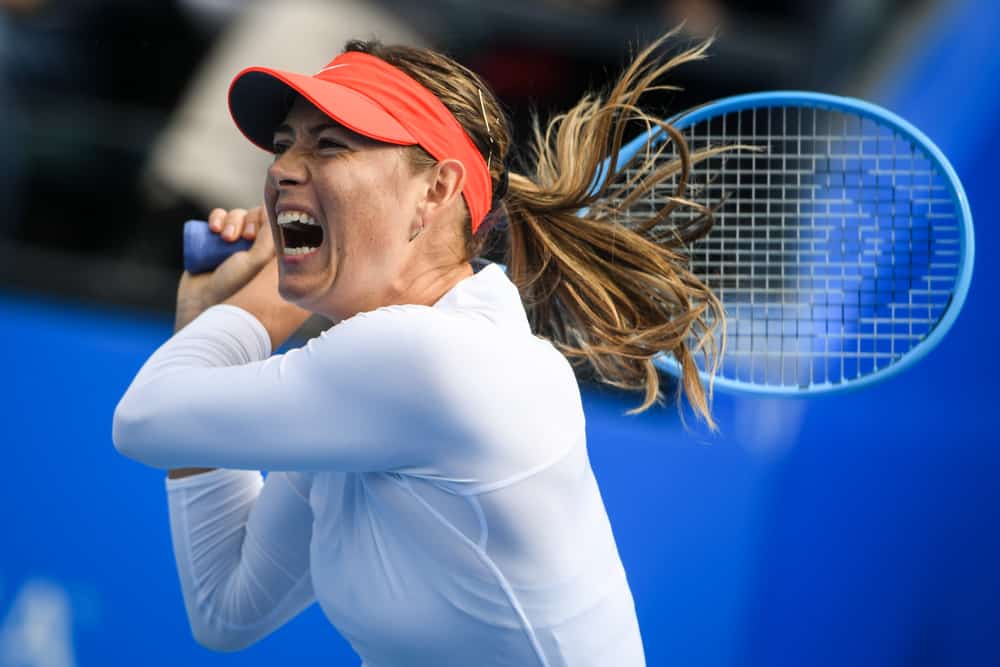 Grunting is hard to ignore when watching tennis, but players do it because it helps regulate their breathing and increases the intensity of every shot. It can also help them concentrate, even if it seems distracting to everyone else.

Grunting is a loud noise produced as a tennis player strikes the ball, sometimes known as shrieking. It is sometimes unfairly thought to be exclusive to the women’s game, but it wasn’t just Monica Seles who started to bring grunting to the court in the 70s; Jimmy Connors was famous for it too.

We’ll take a closer look at grunting and the reasons behind this iconic sound on the court.

Why do tennis players grunt?

Tennis players grunt because it helps to improve their game. This can be done via added concentration, regulated breathing at the right moment, and added intensity. The science will back this up, showing grunting improves the power behind a shot.

Grunting has become synonymous with certain players—Maria Sharapova and Rafael Nadal, anyone?

Grunting is not for everyone, though—do you remember hearing Feder grunt on the court?

What exactly is grunting in tennis?

Grunting in tennis is the noise expelled by a player striking the ball. It seems to be a form of release or a distraction, but there is a lot more to grunting than this alone.

Grunting can improve performance. It is by a small percentage (around a 5% increase in velocity), but tiny margins matter on the court. Many see it as beneficial for the grunter but detrimental to the opponent’s performance.

What are the benefits of grunting in tennis?

Research has studied the benefits of grunting in tennis to show that it can increase the velocity of a shot.

The additional power applies to both ground shots and service. The latter is thought to add up to 7km/h compared to serves hit without grunting. Grunting does not consume more energy or take any more effort, so many experts believe that grunting is a performance enhancer and can be sustained throughout a match.

History of grunting in tennis

To delve into the history of grunting in tennis means looking at the father of the tennis grunt, Jimmy Connors. He brought grunting to the court in the 1970s, and although it was controversial then, it has become more acceptable over the years.

However, this does not mean grunting is for everyone; many players have spoken out about it. Some find it strange since many top players are near silent when they play. Martina Hingis never grunted, and neither did Roger Federer.

Many players justify their grunting by saying they are unaware of it and that it is a natural release and a part of the game. Maria Sharapova, the loudest grunter of all (her shrieks could famously reach 100 decibels), said that she could not change the way she is on the court as she has been grunting since she started playing tennis.

The science of grunting In tennis

The science behind grunting in tennis is linked to sports like weightlifting, which use a lot of strength. A lot of the time, these athletes yell and scream to get themselves going and beat their personal best.

Science tells us that grunting helps to increase the velocity of a shot, and the same goes for other sports where short bursts of energy are common.

One 2014 study found that college tennis players who grunted had an increased velocity of 4.89% in the forehand and 4.91% in the serve.

Tennis is about small margins, so it makes sense to get an extra 4.5%+ from a shot if possible.

Grunting has been a controversial topic in tennis for years. Some of the most infamous fallouts include Ivan Lendl’s complaints about Andre Agassis’s continual grunting in the US Open Final of 1988. Lendl argued that Agassi was louder when hitting a power shot, which impacted his timing.

Martina Navratilova spoke out against grunting in 2009, saying it was essentially cheating and a way of distracting the opponent. Many players have been quick to criticize grunting,

Are tennis players taught to grunt?

Tennis players are not taught to grunt, but it is something that many players develop from a young age. Maria Sharapova famously commented that she had done it all her life.

However, trainer Nick Bollettieri has coached some loud grunters in his time, most notably the likes of Sharapova, Agassi, the Williams sisters, and Seles. This is a link that many have made, with some going as far as saying he deliberately encourages them to grunt.

Who started the grunting in tennis?

Two players are thought to have started tennis grunting: Monica Seles and Jimmy Connors, although John McEnroe should also be mentioned as a grunting pioneer.

Grunting started during their era in the 1970s, and these iconic players were the originals.

Does grunting negatively impact an opponent?

Grunting is, at the very least, a distraction that can negatively impact an opponent. Some players have spoken out against it, saying it affects their timing, but Serena Williams said it does not distract her at all.

It all depends on the individual—Roger Federer seemed to be okay with it throughout his career.

Which tennis player has the loudest grunt?

The loudest grunt in tennis is often thought to be Maria Sharapova’s. The Russian pro could often make louder than 100-decibel grunts, which often shocked the crowd and her opponent.

Grunting has taken its place on tennis courts for decades, and it seems to have become more accessible with every generation of players.

There will always be those who find it a distraction. Unfortunately for them, it has well and truly become part of the game.